Hewlett-Packard, a computer industry pioneer, is cashing in on the marijuana “green rush.”

In a first for the fledgling marijuana industry, HP will start providing registers preinstalled with software made for marijuana businesses.

The $35 billion enterprise company, which sells and installs complex tech products for other companies, is partnering with the marijuana startup Flowhub on the first-of-its-kind retail offering. HP will manufacture the hardware, while Flowhub will handle the software side and sell the machines.

These new registers are designed for marijuana dispensaries, and their software aims to help licensed business owners track sales and inventory, create reports, and comply with state regulatory agencies by sending reports to them automatically.

There was a time not too long ago when a person using medical marijuana could buy their legal cannabis with only cash, as federal law prohibits banks and credit unions from taking money for marijuana. Even when dispensaries started accepting debit and credit cards, some people still paid with cash or refused receipts because they didn’t want to create a paper trail.

But times are changing. Nine states and Washington, DC, have legalized marijuana, and more than one in five Americans now live where they can legally use the drug recreationally. Legal marijuana sales hit $9.7 billion last year, a 33% increase over 2016.

As legal marijuana becomes increasingly prevalent and the stigma against the drug decreases, tech companies have set out to solve one of the biggest problems facing the industry: compliance.

HP saw the legitimacy of the marijuana industry

In addition to making laptops and printers, HP is one of the world’s leading providers of point-of-sale systems, whose global market size reached nearly $48 billion in 2016.

The marijuana industry opens up a new revenue stream for the PC giant. 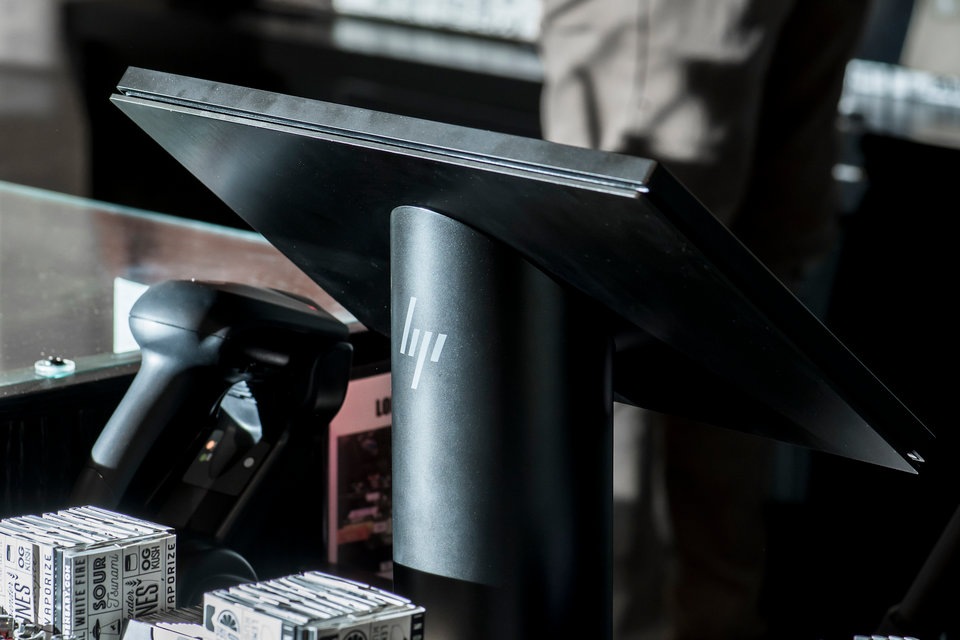 “They read about us,” Sherman told Business Insider. “Obviously, we knew about them.”

In December, Flowhub welcomed representatives from HP’s retail solutions department to Denver for a tour of some large-scale marijuana dispensaries. Sherman said that the experience showed HP employees how regulated and “really legit” the marijuana industry had become.

Earlier this year, HP started manufacturing the hardware for these point-of-sale systems. Flowhub installs its software and sells the machines to marijuana business owners. A few of HP’s systems have been in beta testing at select dispensaries since the start of the year.

Aaron Weiss, HP’s vice president and general manager for retail solutions, said in a statement: “HP is delighted to be a key part of the solution in this exciting new regulated industry.” 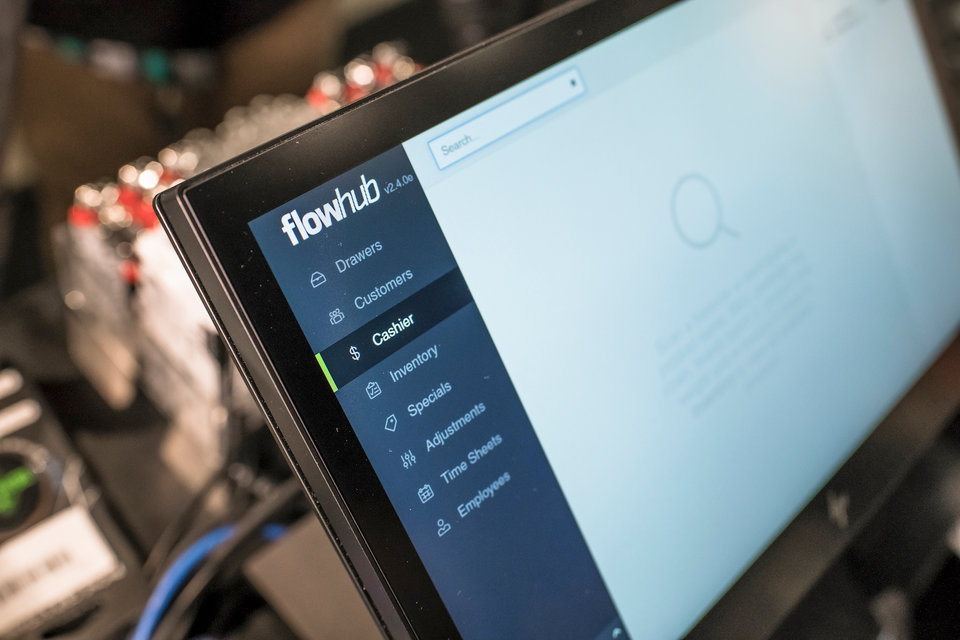 The machine is metal and built to last, according to Sherman. His hope is that the system could someday replace iPads and computers that some marijuana businesses use as registers.

While iPads and computers might be cheaper than some point-of-sale systems, “you’re getting a device that’s going to break after six months or a year,” Sherman said.

“These machines are doing a big job — an important job — so you want quality,” he added.

Founded in 2015, Flowhub makes software for marijuana growers and sellers that allows them to monitor marijuana from “seed to sale.” It collects and crunches data to ensure every leafy bud and marijuana product is handled in compliance with state law and federal guidelines.

In practical terms, Flowhub helps marijuana businesses show the government that products aren’t coming in from illegal cultivation sites or disappearing into the black market.

During a typical transaction at a dispensary that uses Flowhub’s software, customers order with an employee and pay using cash, credit, or debit at the register. The point-of-sale system logs the transaction and tracks what inventory comes in and leaves the store.

If there’s a discrepancy between the recorded inventory and what’s actually in the store — known as shrinkage — a business owner can search the seed-to-sale platform to figure out a product’s last known position in the supply chain and which employees handled it.

Flowhub creates a sort of audit trail for all the product managed — something a business owner can provide if authorities seek proof of compliance.

When business owners sync their registers to the cloud, the Flowhub platform sends sales reports automatically to Metrc, a database company that works with government agencies that regulate legalized marijuana. 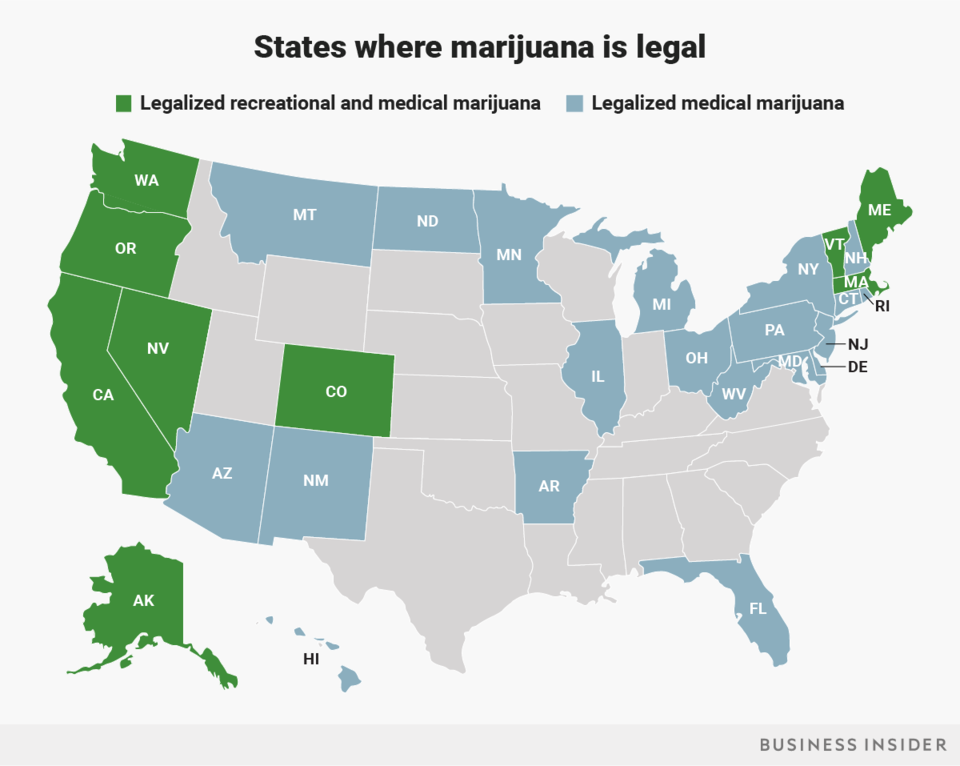 Flowhub says it processes over 1 million transactions every month. With help from California’s recreational marijuana market, Flowhub projects that its revenue will top $5 million this year.

Big tech is taking the leap into legal marijuana

HP is the first major tech company to produce hardware for the marijuana industry, and it joins another computer industry pioneer in tapping into the “green rush.”

In June 2016, Microsoft said it would start making seed-to-sale software from the marijuana startup Kind Financial available through a cloud-based software suite that it distributes to state, county, and municipal governments.

Kind’s software helps regulatory agencies keep tabs on sales and commerce and gives entrepreneurs the comfort that comes with compliance.

David Dinenberg, the founder and CEO of Kind, told Business Insider that it wasn’t easy persuading Microsoft, a 43-year-old company, to foray into marijuana.

Kind appealed to Microsoft because it doesn’t “touch the plant” or have direct ties to growing or selling marijuana, Dinenberg said. There’s less risk involved for companies that provide ancillary products and services, even when the customer ends up using marijuana.

“At the end of the day, we are a technology company that provides services,” Dinenberg said. “We happen to cater to the marijuana industry, but we don’t grow marijuana.”

The same thinking applies to HP’s deal with Flowhub. Though the hulking enterprise company is getting involved with the marijuana industry in a tangential way, it still marks a major milestone for the technology and marijuana industries.